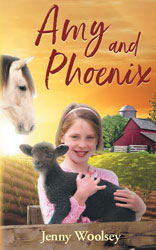 Eleven-year-old Amy Pringle lives on a farm. She knows all the animals by name and can talk to them like Doctor Doolittle. Amy is looking forward to her favourite ewe, Edna, giving birth. When she sees her dad with his gun, she knows something is wrong.

Amy must think of a way to save Phoenix, the three-legged lamb’s life.

After her sister Hannah, posts a video of Phoenix on YouTube and it goes viral, Amy thinks all her problems are solved. Little does she know what is about to happen.

Will Amy be able to save Phoenix after all?

Amy and Phoenix is a heart-warming fantasy story about a caring, strong-willed and determined girl. It explores the themes of disability, advocacy, friendship, farming and agriculture, animal welfare and cyber safety.

Available as an EBOOK or PAPERBACK: