I have been visually impaired since birth and it is a symptom of my Crouzon syndrome.. I entered the world with bulgy eyes and the pediatrician initially thought I was blind. I wasn’t, but was short-sighted and began wearing glasses as a toddler.

At the age of nine, in 1977, I underwent pioneering craniofacial surgery where I had my eye sockets moved forward and blocks of hip and rib were used to stabilise the area, and to build up the eyebrow and under the eye. There were complications with my left eye remaining bulgier than it should have been.

The medical notes state that a scan showed pressure on that eye, either from a blood clot or swelling of the periorbital muscles. Upon investigation nothing was found but the damage had been done. The optic nerve in my left eye had become very pale looking and was seriously injured, resulting in very little vision. As well as the destruction of the optic nerve, my left eye suffered third nerve palsy which there was some recovery from.

After the swelling went down in my left eye, it remained bulgier than the right, the eyelid was lower, and  the eyeball pointed down and outward (a result of the third nerve palsy). Nothing could be done to help the situation.

My right eye lost some sight and more after my final surgery in 1985. The optic nerve in my right eye showed some damage, and to add a bit more, I was identified as being red-green colour blind.

My corrected vision (with my glasses on) in my right eye is 6/9 but in my left eye I can only see light and shade and half of it is black (blind). As I have grown older, like everybody, I have lost my close vision so I wear multifocals. and I carry a magnifier for very small writing. With only having one good eye I have no depth perception and cannot see 3D.

Now if this was all my vision issues were, I would actually be okay, as many people with one good eye drive. But my operations had another complication which wasn’t identified until I was around 16 years old and wanted to drive.

A vision field test is a procedure where you sit at a machine and click on lights that flash in front of your eyes, and the print out shows your field vision or your peripheral vision. I didn’t have enough sight in my  left eye to do the test. In my right eye the field vision test came out as poor and I was diagnosed with a condition called hemianopia. https://www.rsb.org.au/homonymous-hemianopia

Hemianopia is similar to tunnel vision where you see as if you were looking into a tube, but in hemianopia you only see a semi-circle, so out of half of the eye. And the half that I do not see, is my left side. This diagram shows in a simple way how I see – only through the right side of my right eye (the white section). The photo underneath is good illustration. 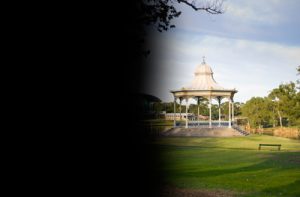 As you could imagine, this creates some issues for me, from tripping over things, bumping into things and people, and not seeing people or objects that come up from my left side. I also can’t see up if I look down, and if I am looking down, I can’t see what is up.

I think my first most traumatic accident due to my hemianopia was when I was thirteen years old. I was zooming over and down the rail bridge in my hometown and a car came out too far from a side street. I didn’t see the car until it was too late to swerve around them and ploughed into the car. I busted up my hand and my bike.

Glaucoma which is a hereditary eye condition and generational is in my family. It is detected by high pressure in the eye and if left untreated causes the peripheral vision to deteriorate. As a teenager I was also identified as having glaucoma and was put on preventative eyedrops, which I am still on.

Cataracts are another condition that many people get when they grow older. A cataract is a cloudy lens in the eye which causes blurred vision, glare sensitivity and as if looking through a curtain. I have been recently told I have a cataract in my good eye which is causing its own issues..

I always wanted to fit in and hated wearing my glasses as I was called four eyes. This was on top of the other cruel names I was called because of my bulgy eyes. I preferred sitting up the front of the class or copying off my neighbour. Often I would pretend that I could see things which I couldn’t.

As I entered adulthood I usually had someone with me when I went out and about, but when I did venture out alone I would only go to certain takeaways where I knew the menu or they had a printed card.

Recognising people from a distance has always been an issue and I’ve been called a snob. I often wave to people who I think I know but when I can actually see them clearly, I don’t. I can’t see through car windscreens and when I was teaching, I would sometimes open strangers’ doors thinking they were my friends pulling over to pick me up.

My eyes also play tricks on me. I often see things but when I get closer or I ask someone for clarification, they are not what I thought.

In the classroom I kept the layout the same, I used my hearing more and when on playground duty I would walk a lot so I could see what the students were doing. I never told the principal and other teachers how severe my vision was – just that if I did not acknowledge them when they came into my classroom, then they needed to speak or cough. Usually the students told me anyway. I never told my students either how severe my vision impairment was. They just knew that I wore glasses. 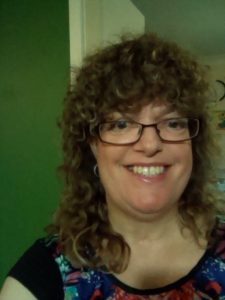 I have always been dependent on people… my parents, friends, husband, colleagues, and this has affected many of my life path choices.

After leaving teaching in 2014, my world became larger with my writing. I was going places my husband didn’t want to go. He was also becoming increasingly unwell so was unable to take me where I wanted to go and I found I was taking over jobs that he had been doing.

I found with this increased travel that my low vision was becoming an issue. I had some scares and falls, and my anxiety levels were heightened. After falling into the train and coming close to falling down a long set of stairs I decided to ring Guide Dogs to see if I could get some help.

They told me that I was eligible for a long cane, also called a white cane.

I decided that I would give the cane a go, and it came easily to me. The hardest part of using the cane was ‘going out there’ with it. It was psychologically more difficult than I thought it would be. I am back to being stared at and pointed at, and children ask their parents, ‘What’s that?’ Those childhood demons flooded back in the beginning, but I am an adult now and am able to put them back in their box. I need the cane to keep safe and to keep my anxiety in check. And now if I don’t acknowledge people, they know why! 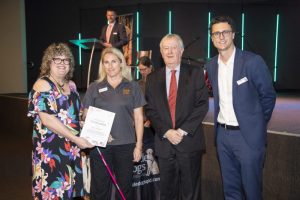 I currently have two canes – a pink one called Seymour, and a rainbow one called Beau. I am now able to travel far and wide, and if you’re lucky, we’ll come and visit you! 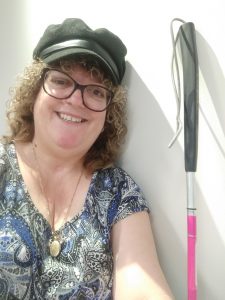 Guide Dogs Queensland interviewed me about my new found freedom and independence because I have my long cane. Read the article here: